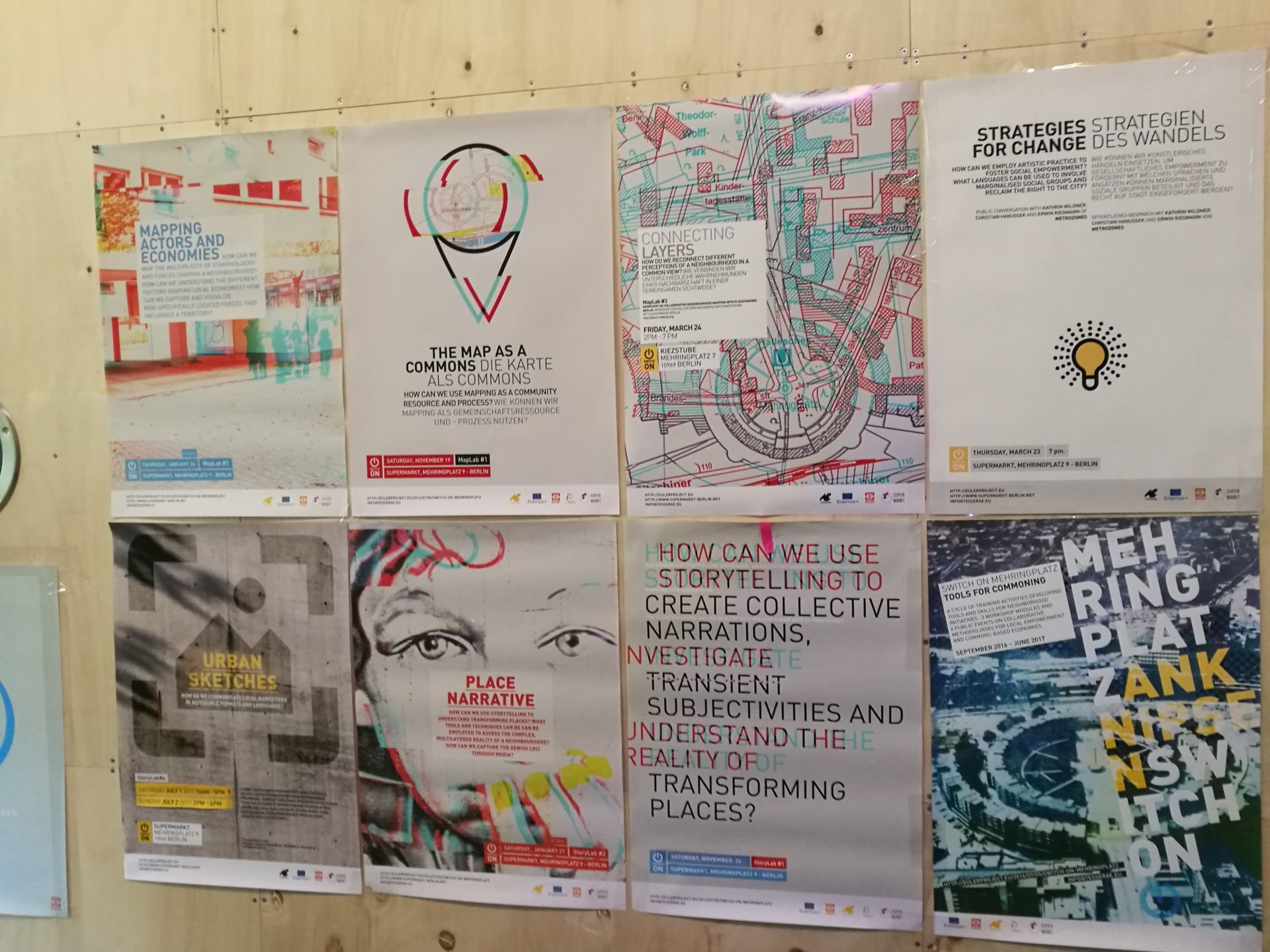 Social Action: innovative approaches and methodologies for intervention in the public space

CiutatBeta was born as a platform for research and prototyping of innovative tools and citizen processes for intervention in public space. A place to explore the DNA of the city in which we live and, through an interdisciplinary approach, design and test prototypes and creative solutions tailored to the needs of specific neighborhoods and / or new social problems.

CiutatBeta becomes a different and innovative training area, where people from neighborhoods and different professionals work together to build prototypes to run them and put them to the test in the field.

It works on a territory treating a specific problem. From the neighborhood and concepts such as sustainability, education, networking, media containers enter the neighboring areas from which to address and intervene on their reality. And the way to do it is in multidisciplinary teams.

CiutatBeta intends to explore the importance of citizens as «producers» of the city, with an emphasis on participation and civic action. The process is inspired by the role of cities in providing an ‘expanded education’, whist also taking into account the processes of inequality generated by the rapid changes experienced at all levels today, particularly in the context of crisis.

CiutatBeta aims to be a work and analysis platform based on quality and creativity, focusing on the DNA of the city, from the perspective of citizens. The project works in neighborhoods and urban areas and from different areas / containers of new forms and processes such as: Networking, Mobility, Solidarity, Sustainability, Environment, Collective Culture, Play, Urban Energy …

The project involves three phases, namely: OPEN (diverge, think openly), EXPLORE (investigate, explore, think), CLOSE (conclude, evaluate, feedback). Within each phase there are multiple activities, which take place on 3 layers: the Web layer (where all the work is focused on documentation and online work), the Workshop layer (which includes a preliminary field visit to the neighborhood and workshop attendance) and the Action layer (including workshop action, as well as monitoring and evaluation activities).

CiutatBeta is a continued training process, with tangible and measurable outcomes. It is implemented through cross-sectoral collaboration, including community work, cultural action and management, communication, the possibilities of new ICT as well as other emerging areas in the social sciences and urban studies.

This is one of the distinguishing features of CiutatBeta: its cross-disciplinary perspective, since, in order to redesign cities that are adapted to the needs of the emerging citizenship, and make it effectively, we need to involve as many agents and professional areas as possible. Other points of view, techniques or ways of doing are necessary for a common goal shared by everyone.

The City as a learning environment

Our project idea is to create a link between cities’ long-term strategic planning and citizens whose immediate needs remain unresolved. We are aware that there is a large gap between the government and the real needs of the neighborhoods, and we believe that the methodology proposed by CiutatBeta can help to address this.

Is it possible to redesign cities for an emerging citizenship?

This is not a random question. We believe that it is necessary to start from a question to generate many more and to explore the answers and find more questions. At present there is an emergence of concepts that connect the city with what is happening, concepts such as ‘Smart Cities’, which give the city the ability to remember, anticipate and relate. But we should not think of the city as a single item, but as an almost symbiotic construct where citizens play a crucial and decisive role. CiutatBeta aims to emphasize the role of citizens. Aware that this symbiotic relationship with the city, given the speed of change in technology, cultural and social changes that occur in all living societies, some citizens are able to adapt to changes while others are not, and new profiles, needs and conflicts emerge. It is at this tipping point where CiutatBeta comes into play.

We must not ignore the dimension of expanded education cities that have, and the processes of inequality generated by these rapid changes being experienced at all levels and affect those who live in them.

Urban Empathy: We refer to the importance of inserting us into the relational fabric of the city as a prelude to proposed urban design strategies or action. This lets us know where you are working with a more prepared and responsive preexisting knowledge on the environment.

The process begins by detecting redesign cities as key elements – urban empathy – or the emergence of open processes such as «bottom-up» affecting urban settings. Urban local actions, regardless of urban planning.

We live in a world that is moving towards 70% of the population living in urban environments need to reflect on the increasingly important role that cities will be as true catalysts of innovation processes and at capturing talent and creativity.

One of the keystones of CiutatBeta is taking advantage of the experience, competences and knowledge of each participant in the different phases and activities. The project involves multidisciplinary professionals and people who live in the neighborhood where the prototype is designed (In both areas, elderly people living in situations of poverty line, there is a risk of urban gentrification). That means that the workshop moments is a part in a bigger process that has to come together in the building up of shared knowledge by facilitators, participants and the whole community (including established institutions, professional sectors, virtual communities, etc.).

We are convinced that the form, function and identity of cities are defined by the human factor. We want to create work processes underway proposing reflections on the need for visible concrete innovative approaches to specific problems of the cities.

The results are the actions that occur in the implementation process. This process is divided into three parts: 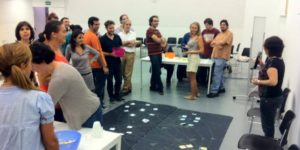 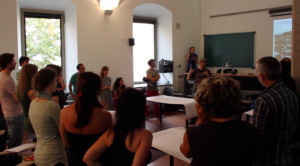 Each workshop / open workspace introduces creative processes with the aim of changing the meaning of the concept of «everyday life.» The city «emotional» that propose satisfied with the incubation of various projects and pilot born workspace, incorporating ideas and results tracking the impact of these projects / actions urban generated.

It is a point of diffusion and connection. The network is a space that is in the city: the design of the project will provide an online platform placeholder information that is generated and an information. Open processes initiated with workshops complement the intangibles that provides ‘network’. The visualization of the data elaborated in workshops and becomes the Digital Identity Project.

The digital platform put together by sharing information, knowledge and tools that make up a digital continuous development.

The third dimension is the most important project is a commitment to move concrete ideas on evolution or transformation processes. Therefore, we believe that the concept of «prototype» in its broadest sense, fits well and gives meaning to our intention. A prototype contains a possible alternative view or an idea, but does not say if it is viable to test.

The idea of prototypes Prototype is not a phase in itself inside CiutatBeta, is a core process. Where the post workshop phase has sometimes intangibles results such as new skills for the learners, sometimes the developed methodology will have a tangible result, called the Prototype, whom the group will carry after the post-workshop phase. This Prototype can be virtually anything the group and the trainers will decide. It is the output of the training process that might be a memorial map online or an exhibition, etc.

Some examples of prototypes:

Painters of the memory

Storytelling of Painters of the memory

Sustainability of the neighbourhood

The project CiutatBeta help to create the methodology of the European Project BeLearning. BeLearning is a methodology designed to learn, share, transfer and enjoy knowledge. It uses ICTs through a blend training combining meeting, working and researching in a rich mix of interactions with traditional media: presentations, workshops and actions as concrete results. BeLearning methodology adapted in several projects to be used to expand the employability possibilities of learners via the acquisition of a mix of digital, educational and social competences.

BeLearning is also defined as an environment because the training experience involves the learners and the teacher in a process of multiple interactions. Those interactions happen between them and with other actors involved into the training process. The methodology is an exploration of both the digital and audiovisual possibilities of learning in a structured way. Furthermore, Belearning goes beyond the basic implementation of training courses and/or workshops as it incorporates previous and future actions as integrate part of the learning process.

The underlying concepts in this methodology:

2nd basic concept: Interdisciplinarity: Belearning is about the ability to bring together the different profiles, levels of knowledge and organisations into common projects.

3rd basic concept: Adaptability: BeLearning is a training methodology that can be used for different training sessions according to their necessities and contexts of their learning programs.